The Sand Pail Report - Saving the best for last

Back in the spring Himself and I put together our Sand Pail List for the summer.  It was a list of fun things we’d like to do that maybe we had never done or hadn’t done in a long time.

One of the comments I received was "Love this! Can we add "meet up with Rebecca" to it - and I'll put "meet up with Donna" in mine :)!"  And so it was added.

And so we did!  It wasn't summer, but who cares?

We met in the middle at a beautiful resort/park to see the Christmas light display and have dinner.  When Rebecca texted me that they had arrived, Himself asked if I would recognize her when we got to the lobby.  Not a problem!  It was like meeting an old friend for the first time.

What an awesome evening!  We talked about everything - faith, IF, authors, running, blogging, Breaking Bad, and so much more.  I love talking with someone who "gets it", who understands what we believe and why we do.  Those conversations are so energizing.

Even a call from our dog/house sitter to say she locked herself out hardly paused the conversations.  A call to Sis to rescue the two strays set everything right.

I can't wait to do it again.

(I had to "borrow" Rebecca's photo.  I had two cameras and didn't take a single picture!)

PS.  Inspired by the surroundings and by this post we came up with a possible idea for next summer.  You'll just have to hang on a bit for more details. 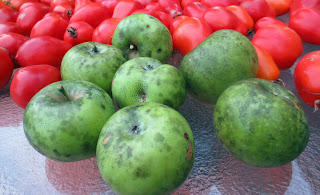 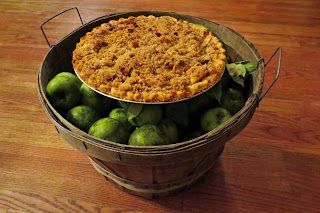 I'm sure there is a life lesson in there somewhere, but, at the moment, my mind is too tired to find it.

We have an apple tree in our yard from when the neighborhood was a cattle farm.  The tree really hasn't produced much until this year.  Actually, it was so loaded with apples that a large branch cracked off.  The apples in the basket are from that one branch alone!

I didn't use nearly enough of the apples, for which I am sure the deer are thankful, but when I did, boy was the eating good!

I'm sure there are a whole lot of lessons in the basket of apples.  I'll let you figure them out!

Maybe I’m a bit odd, but there is something I find incredibly beautiful about an empty farm field or garden.  After the crops have been harvested and the plants plowed under or removed, there remains nothing but bare earth.  The land has done its job for the season past and now rests in emptiness.

The next months will be spent under layers of snow or soggy in the wet of rain.  The colors will be dull and mostly monochromatic.  But still it is full of texture.  It is far from boring. 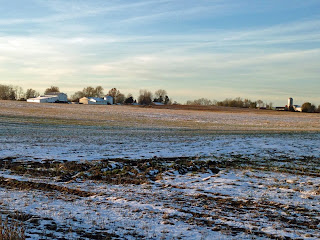 The weather is turning colder and the cycle of life for farm fields and flower gardens has come to an end.  Soon we will be preparing for Christmas. I have already seen the beginnings of it in the sale aisles of the stores and on the city streets where decorations are starting to pop up. The radio announcers have begun to speak of Christmas carols that they plan to play in the weeks ahead.

But now.  Now is an in between time.  The vibrant colors of summer and fall have faded and the holiday reds, greens and golds have yet to appear, but the texture remains.  Quiet, unassuming.  Resting.

Growing up we were far from rich, but we never were in need of anything. We might not have had everything we wanted, but never lacked a warm roof over our heads, clothes to cover us, food to eat, entertainment and activities to amuse us.

My mom taught us a great lesson, one she often showed us by example, that we should have our Somedays.

If we got everything all at once, she said, life would be boring. What would there be to look forward to?

As I mentioned, she was a great example. Growing up she was often told by her teachers that she was stupid and wouldn’t amount to much. Education past high school would be wasted on her. Thankfully, somewhere along the line she figured out that just wasn’t true.

When I was in grade school she started back to school at the local community college. She had to drop out when she needed to go to work full time after my dad had gotten laid off from his job. After getting both her daughters through private high school and then college, she went back to school and earned her Associates degree with a double major. She knew someday she was going to do it and someday she did!

I started thinking about my Somedays. When I was young I often thought I wanted to be a writer. I loved reading and among my favorites was Laura Ingalls Wilder. Someday I wanted to be like her. Apparently November is NaNoWriMo – National Novel Writing Month. Perhaps now is the time to start.

When I was young, someday I wanted to be a mother.  At my age, unless God sends a stork to drop a baby in our laps, that isn't going to happen.  And I'm okay with that.

I think I would have liked the farm life. I would like to have goats and chickens and alpacas. Hopefully that Someday will be next summer.

Someday I'd like an always sparklingly clean house.  Not going to happen.  There's too much else to do.

I’ve achieved many of my Somedays. I have a wonderful husband, a lovely home, a beautiful niece and Goddaughter.

I need nothing. But I yearn for Somedays.

What are your Somedays?

A great day to be alive 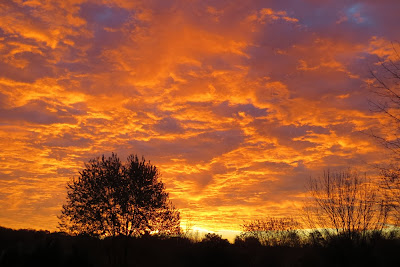 And it's a great day to be alive
I know the sun's still shinin’ when I close my eyes
There's some hard times in the neighborhood
But why can't every day be just this good?
AMDG
Posted by Donna at 8:33 PM 1 comment: