Time, Words, and Getting SMART

The last two weeks of December at work were really slow and quiet.  Maybe a quarter of my coworkers were in the office.  The rest were out celebrating the holidays and leaving whatever  needed to be done, which wasn't much, to the rest of us.  Let's put it this way - it was so quiet that the Hairy Beast came to work with me, twice.  The second time he even had a friend to play with! 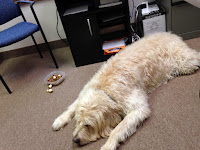 Now it's the end of January!  How did that happen???
Once everyone was back in the office after the holidays, things got crazy busy.  I have a lot of projects going on, my manager was out of the office unexpectedly due to the death of his mother, and I moved offices.
We've been fairly busy at home as well.  Christmas decorations were taken down and put away.  We move out all the living room furniture and shampooed the carpet.  Last Saturday we took advantage of the unseasonably warm sixty degree weather and drove down to Amish county to stock up on a few necessities.  It's been a blur of a month.
Earlier in the month, many people were coming up with what their "word" for the year was going to be.  I wanted to come up with one that was positive and glorious and profound.  Hope and Change sounded good, but I think they've been a bit overused, no?  If I really thought about what I wanted for this year, one word stuck out - Reduce.
I didn't make New Year's resolutions.  Those always seems to go by the wayside rather quickly.  Instead, I wrote down my goals for the year.  I tried to be "SMART" about them - Specific, Measurable, Attainable, Realistic, Time-bound.
When I looked at my goals for the year - lose weight, eliminate sugar from my diet, clean out the basement and garage and sell or give away what we don't need/use, spend less, shrink debt, exercise more, watch less TV, read more - many seemed to have one thing in common: the need to Reduce something.
It's not a glamorous, sexy word.  It's not profound like I had hoped.  But, it is accurate and something that has been weighing on my mind.  And, it has the potential of having an impact on my life.  At least I'm hoping it will.
AMDG
Posted by Donna at 6:30 AM 3 comments:

There has been lots of good food for thought this week.  Alicia Colon at Jewish World Review is fast becoming one of my favorite writers.  Her insight, coupled with experience, makes for an interesting read.  This week, she shows up here twice on my links.  Enjoy!
- - - - - - - -
The totally insane reactions to Donald trump's election by the progressive left is proof that their brains have been wired to behave against traditional Judeo-Christian values. If it sometimes seems as if the whole world has been turned upside down and common sense has been thrown out the window, well, it has and we can trace this disastrous progressive movement to the 1940's and Nazi Germany.
Read The Brainwashing of a Nation
- - - - - - - -

At last Saturday's Women's March in DC any sign of humor was out shadowed by the stridency, anger and hatred spewed by speakers like Madonna and Ashley Judd who ironically stooped to the coarseness and crudeness they despise in our new president. I really can't imagine Susan B. Anthony and the other suffragettes uttering four letter words and reading obscene poems alleging incest at their rallies for equal rights.
Read more here.
- - - - - - - -

Still, “pro-lifer” is a useful abbreviation. You try saying, “Eighteen anti-abortionists ate enchiladas in the open air,” five times fast. And “pro-lifer” has now been hallowed by decades of use. In case the consistent crowd didn’t know, that’s actually how words become standard usage – not by extensive attempts at twisted logic. So I am perfectly willing also to be branded as a “pro-lifer” – with the standard meaning. Just don’t extend that meaning. If everything is a pro-life issue, then nothing is.
It's all here.

The internet can be both a blessing and a curse.  I find I can whittle away hours on Facebook, Instagram, Pintrest and whatever.  But, the web is also a great resource for sharing ideas and finding truth.

Have you ever read something and think "Yes! I get that." or "Hmm.  I hadn't thought about it that way."?  There have been a lot of good, no, great articles lately that have been like that for me.  I read them and find that they are worth sharing.  I'd like to do that more often.

Since politics seem to be on most people's minds these days, here are a few with which to start.
- - - - - - - -
His obsession was so out of touch that the Supreme Court, divided as it is, issued a unanimous ruling telling Obama he must find another way.  When Ruth Bader Ginsburg joins hands with Clarence Thomas to rebuke your fixation with forcing nuns to violate their conscience, you have reached the pinnacle of ideological extremism.
Read the rest of this here:  The one act that defined President Barack Obama

- - - - - - - -
"When the Department of Justice used Operation Choke Point to target legal businesses because they disagreed politically with those businesses, the Democrats on this committee were silent," Cruz said.  "When the Obama Justice Department sent millions of dollars of taxpayer monies to sanctuary cities that were defying federal immigration law, the Democrats on this committee were silent."
More here:  Ted Cruz Slams Democrats During Jeff Sessions Hearing
- - - - - - - -
While the environments may be completely different, the larger principle is exactly the same: Why should one type of person be supported for refusing to participate in something antithetical to her values while another is not and even organized and legislated against?
Read the rest here: Remember the Christian bakers

AMDG
Posted by Donna at 8:38 PM No comments: