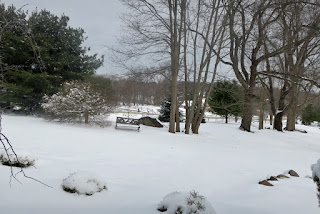 If you couldn't tell from my last post, I am so done with winter.  But apparently it isn't done with us.

If schools are closed, I figure the roads aren't good enough to drive on.  Usually, since I have the option, I just work from home.  But, for whatever, not very good reason, I left my laptop at work last night.  It almost always comes home with me every day.

So what's a girl to do? Play hooky from work and have a jammy day.

And it was good!

We hung pictures and took apart a television.  I read, made Irish Soda bread, sewed, read some more, and went out to lunch once the roads were cleared.  All-in-all, a perfect day.

We "reframed" some paintings that we bought in Italy.  And by we, I mean Himself.  We got the pictures from street artists as souvenirs during the trip in which we got engaged. (20 years ago, today!)   The frames were kind of a gold painted wood with light teal matts and they didn't quite go any more with our décor.  I was going to buy new matts, but a little bit of spray paint, both on the matts and frames brought the paintings back to life.  I'm so lucky to have such a handy husband!

Back in January, I mentioned that I wanted to make a fleece jacket to wear around the house in the colder months.  I started it and have been making progress ever so slowly.  After cutting it and doing one seam on my regular machine, I decided that the serger would work better for that.  So, the next challenge was getting the machine out of the basement and set up.  If you know anything about sergers, they are a royal pain to thread.  I'm happy to say that although it was challenging, and took multiple attempts, I didn't say any bad words in the process.  Yeah for me!

As close as the jacket is to being done, I started a project that is much more fun and has me really enjoying sewing once again.  But I can't show you it yet.  It's a baby quilt.  The mom knows about it, but she just might see it here, so no pictures.  Sorry.

Marching Through Lent on Idle

I woke up yesterday morning, again, to the sound of the snow plow going down our street.  This winter has been hard.  It just doesn’t end.  We should be seeing signs of Spring – crocus blooming, daffodils peeking out and Robins returning – but we don’t.  Just more snow.  And more cold.  And more steel gray skies.

This winter has been hard.  I can see it in what I have been doing, or more accurately, not been doing.  I had plans, once the holidays were over, that I would sew and clean the basement and write.  I had emails to return and phone calls to make.  I have never, in all these years of blogging, gone this long without writing anything.  But instead, I fussed with a failing computer, watched way too much television, fought the flu, and slept.

I was talking with a coworker last week about this.  Thankfully, she is a woman of great faith so she understood what I was saying.  I told her I felt empty this winter.  We talked about my view of hell.  Most people picture it as scorching hot, flames of fire, unquenchable thirst.  I see it as just the opposite.  Hell is winter and cold.  Because, after all, what is hell?  The absence of God.  And what is winter?  The absence of heat and color and life and growth.

I don't feel the absence of God.  Far from it.  But this winter made me feel like I was getting a little glimpse of hell.  And you know what?  I don't like it.  At all.

At Mass on Sunday, Father reminded us, that Lent, too, is long and difficult.  As we marked Laetare Sunday, Lent’s midpoint, we might just feel like giving up.  If we have stumbled on our Lenten observances, whether it’s giving up sweets or TV or doing something extra, it is at about this time (donna) that we’re ready to just quit. (get out of my head, Father!)  But don't!  He said now is the time to recommit.  To keep trying.

So I guess winter is a bit like Lent.  Maybe I fail.  Maybe I feel like I'm running on empty.  But, try.  Even just a little.