A number of years ago a friend took us out to dinner at a local French restaurant.  It is located in a small house in a cute shopping district.  From the outside, the restaurant didn't look like much, but we are still talking about that meal.

I was too chicken to order the frog legs or Escargot, but Tim had both and said that they were delicious.  I decided to start with the French Onion soup, and when I placed my order I asked the waiter if they used beef or veal broth.  The look on his face was one of horror.  I was told that they made their soup the traditional way, with water.  I don't think I am exaggerating when I say that was the best, by far, French Onion soup that I ever had.

When I decided to try my hand at making it, I searched for a long time to find a traditional recipe.  You know how many "traditional" French Onion soups use beef broth?  Most of them.  It wasn't until I came across Michael Ruhlman's version that I finally found what I was looking for.

I made a couple of changes this last time I made it and it turned out terrific.  I didn't have sherry or an open bottle of wine, so I skipped both and just used red wine vinegar instead.  I hate fighting with a bowl size piece of bread in my soup, so I put made large croutons and used those along with the cheese I had on hand, an Irish cheddar.  Yum!

The big secret to this soup, though, is time.  To get the dark, sweet caramelization of the onions, it is going to a couple of hours of slow cooking.

In a large pot over medium heat melt the butter.  Add the onions, sprinkle with 2 teaspoons salt, cover, and cook until the onions have heated through and started to steam.  Uncover, reduce the heat to low, and cook, stirring occasionally.  Season with several grinds of pepper.

When the onions have completely cooked down, the water has cooked off, and the onions have turned amber, add 6 cups of water.  Raise the heat to high and bring the soup to a simmer, then reduce the heat to low.  Taste and season with salt and pepper as needed. If the soup is too sweet, add some vinegar.

Portion the soup into bowls, float the bread on top, cover with the cheese, and broil/grill until the cheese is melted and nicely browned.  Serve immediately. 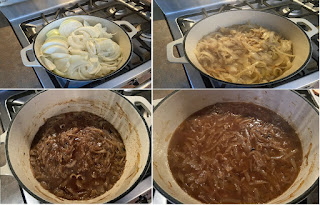 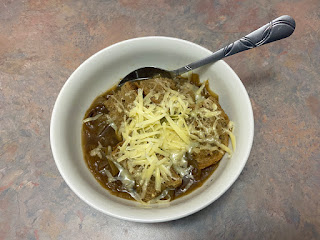