It seems I do my best thinking on my longer walks with Jack in the mornings.  It’s been cold and snowy so our jaunts as of late have been quick; hence, the dearth of posts.

However, in spite of the twenty three degree temp this morning, we set out on a slightly longer outing.  I had been thinking about writing a year-in-review sort of post, but I’m not sure I could remember enough of the year to make it worthwhile.  What did stand out, though, I think I can sum up as It was the year things grew.

Much of our spring and summer was taken up by the new garden we put in.  We are looking to become at least a little more self-sufficient and took the first step in expanding what food we grow.  We went from 2011’s six tomato plants to forty.  Green beans, squash, melons, cucumbers and eggplants were just a few of the new things we sowed.

My guess is I probably bored you more times than I care to admit with posts on gardening and canning.  But, along the way I learned a whole lot, and it wasn’t just about plants, fertilizer and bugs.  There are so many life lessons that can be gleaned while working in the dirt.  Something else for me sprouted, an idea for a book.  Ever since I was in grade school I wanted to write a book.  The garden is looking to be good fodder for that. 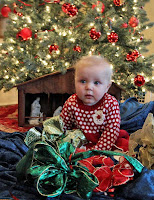 Another thing that grew was our family.  Sis and BIL adopted baby Sara in July.  It was a delightful surprise as they got the call that they were chosen to parent the day after she was born.  Such a life changing week for them!  And it was for the rest of us as well.  Himself and I are not only her aunt and uncle but her Godparents and we are slowly growing into those roles.  Thankfully, Sara’s too little to know when we manage to screw up!

I wish I could say that everything that grew this year was good.  Unfortuantely both my waistline and my pocketbook can tell you otherwise.  Unexpectedly having to replace the furnace in January wasn't something we wanted or had planned on doing.  But when the it is in the twenties and snowing for weeks on end, it just wasn't a choice.  And we are hoping the treadmill we just acquired will help with the waistline and scale issues!

I pray, for both you and for me, the 2013 is a year of good and lasting growth!  (and not the waistline kind!)

This Advent I had the privilege of praying for Sew at Sew Hormonal.  I was excited when I was sent her as my partner as I have been reading her blog for quite a while and she seems to be one of the "rock stars" of the IF blogging world.  I hope she had a blessed Advent and has a joyous New Year!

God bless you and yours, Sew!

May Peace and Joy
be with you this Christmas
and throughout
the New Year! 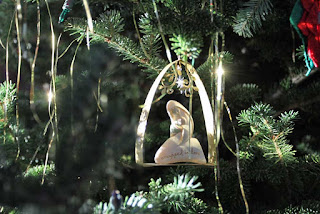 I took my last vacation day of the year today and it was wonderful to have a long weekend.   Saturday and Sunday were filled with visiting family and friends and decorating the house.   Today we planned on finishing up some errands for Christmas.

Himself suggested that before we hit the stores we stop in at church for adoration.   It was a good, no, great, idea.  If you know me, sitting still and quiet is not something I am particularly good at.  Never have been, probably never will be.

Given the horrific events of Friday morning in Connecticut, it was much needed to just be and sit in the presence of our Lord.

While I prayed for you and your future children, another thought came to me.  Perhaps in His plan, IF has been a gift God has given some of us.  We will never know the heartbreak of losing a child in such a unimaginable manner.  We won’t wonder just how terrified they were at that moment.

What if we are not capable of enduring such devastating pain?

What if the denial of something we want so much, children to call our own, is actually a gift? 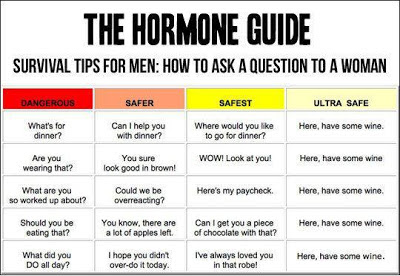 I told Himself that his best bet is to combine both the "Safest" and "Ultra Safe" columns.  Then everyone is sure to be happy.

I figured today was a great day to wrap up this series.  It is the Feast of Our Lady of Guadalupe, who was my saint for this last year.  Also, it is my second blog anniversary.  Given that I started this blog in hopes of letting you know that you can find truth, beauty and goodness even without the patter of little feet in your home.

I wish I could tell you that one day, overnight, it just all magically gets easier.  It doesn’t and you know that.

It can and will get more tolerable.    I hope I haven’t been too glib in saying that and in all of these posts.  I never meant to be.  The trip to acceptance is winding and long and full of setbacks.  It is definitely not a straight line process; it’s not moving only forward and never backwards.

I don’t even remember what I had in mind when I started this series, I just know that I deviated somewhat from whatever it was.  I had hoped to help, to let you know you can deal with it all, and come out fairly unscathed.  But, I think I ended up somewhere I didn’t expect.

I learned something.  Or, at least I figured out that I learned a lot in the last decade and a half.

There are something things about IF that still hurt, just maybe not as much.

IF doesn’t define me.

The sound of  a baby crying still breaks my heart.

The smiles and giggles of a baby still melt my heart.

I am stronger than I give myself credit for.

I am weaker than I want to admit.

I am not alone.

I have many prayers for you, dear ladies.

I pray that your desire to become mothers is realized, either by conceiving or adopting.

I pray that you find peace and healing – of mind, body and soul.

I pray that if you don’t become a mother, you will be okay with that.

And, I pray that you know you are not alone.

Last week I had to travel for work.  To get to the west coast we first flew to the east coast - Washington DC to Washington state.  That made for a not-so-fun, very long flight.  It didn't help that my back was screaming most of the way.

A few odds and ends struck me throughout the trip.

My St. Andrew's chaplet sure gets around.  I brought it with me, of course, since we're in the middle of the novena.  It was a great comfort and blessing, especially when I couldn't sleep at night being all screwed up from the time change.

I love cell phones and the internet.  It is so easy to keep in touch with those back home.  We had pictures and text messages zipping back and forth all week.

I work with some really great people and for a good company.  I know just how lucky and blessed I am.  After the last couple of positions I've had, I know a good thing when I see it.

We live in a beautiful country. Both driving in Washington and flying across country I saw just what beautiful topography there is here.

Flying is a royal pain.  Everything costs something.  Need to check a bag?  That will be $25.    Want to change your seat?  That's $89.  Hungry?  Hand over the credit card.  And that's once you get past security.  Strip off your coat and shoes and belt and everything in your pockets then stand with your hands in the air and get scanned.  Yippee!

I'm a home body.  The best part of the trip was walking into our house Thursday night and into the arms of my honey.

IF: Does it get easier?

But, dealing with IF does become easier.  At some point it is no longer all consuming, the first thing on your mind in the morning and the last at night.  The sharp pain of not being able to get pregnant is gone or at least replaced by a dull ache.

Every once in a while, when you least expect it, the doubts and pain rear its ugly head.  For me, it was a couple of months ago.

A while back I mentioned that while my aunt and uncle were visiting, we were going to watch baby Sara for a day.  I had the day planned and pictured it in my mind.  We were going to pick her up early that morning before my brother-in-law left for work.  We’d go home and I would make breakfast for us all and then Himself and I would take Sara to our favorite art show.   Afterwards, we would come home, she’d take a nap and I’d get the lasagna ready for our family dinner that night.

It sounded like a great day.  I’m a pretty good aunt and Sara is an easy baby.  I was stoked.

Then reality set in.  My visiting aunt fed Sara her morning bottle while I fixed breakfast.  As we ate, the fussing started.  Then the wailing.  Poor baby had a tummy ache of the worst kind.  There didn’t seem to be much we could do to comfort her.  We walked and bobbed and swayed.  We patted her back.  We laid her down.  And picked her up again.  Her belly rumbled and gurgled.

An hour and a half, a bout of projectile vomiting and a messy, messy diaper later she was a little better.  Our plans to go to the art show flew out the window.  As I sat at my computer with a whimpering baby on my lap, my tears came.    I fired off the email below to Himself. 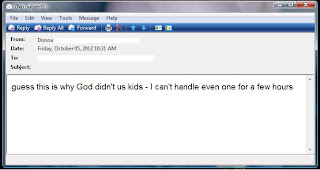