Tim once again had great pictures for this month's theme.  Here is his guest post.
A peach and herb covered chop with a garden-fresh cucumber and potato salad lies awaiting my attention.  I took the photo to taunt my brother-in-law who is a devotee of my lovely bride’s culinary skills.  Point of view: “Git in my belly!” 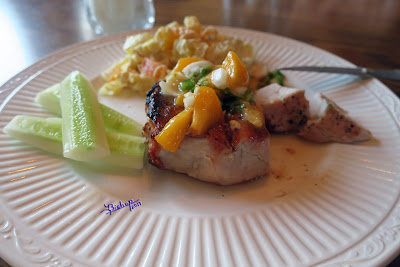 This next shot is from the perspective of our scare-crow looking over the vegetable garden.  The term “scare-crow” is a bit of a misnomer, though.  We have pictures of birds from the size of wrens to hawks sitting contemptuously on his hat.

We have been trying to simplify the gardening process over the years.  This season Donna suggested the use of annual rye-grass as a weed block and end of season cover-crop.  Awesomeness ensued!  A tenth of an acre of corn, potatoes, tomatoes, peppers, and carrots are progressing wonderfully.  Fifteen minutes of mowing beats hours of weeding. 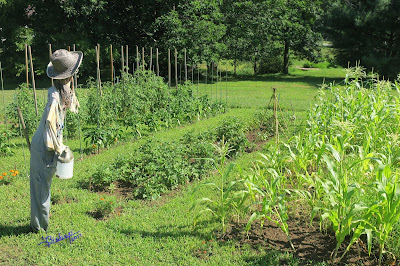 This is my point of view of the garden.  Love that annual rye-grass and the subsequent saved time for more important activities. 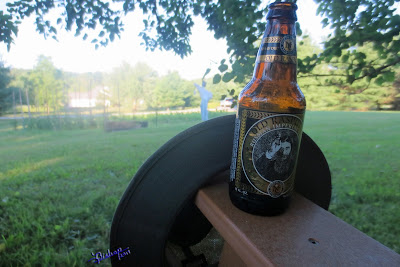 I missed the different lenses and cameras challenge last month.  I intended to connect the Canon 7D to my 6” Celestron Schmidt-Cassegrain telescope.  So, this month I took a shot of the waxing gibbous moon with that same set-up.  The terminator line where day meets night often offers some interesting features.  Here is an unique profile perspective of a lunar crater.  The upper-left corner of the shot shows the curled edge of the debris from impact which formed the rim. 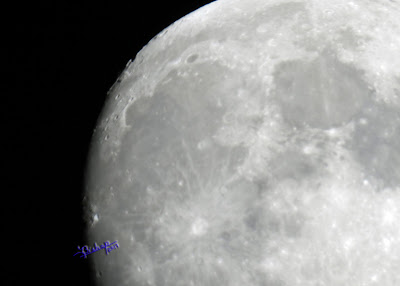 These two fawns recently visited and seemed to have different points of view on which way to head for a tasty snack before the next feeding time with mom. 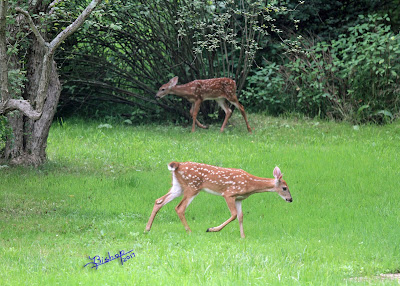 Have a Nice Trip

We decided to have an Independence Day party this year.  And, you know how it it.  There's always one more "project" that will make everything just perfect.  I decided that my never-ending-but-it's-going-to-be-finished-this-summer landscaping project that I thought was done still needed a little something something.

I bought a new clay pot and and bunch of coleus.  Since the the supplies I needed were in the garage, I put the pot together there.  Six plants and a bunch of dirt later, it was looking pretty good.  It just needed some mulch.  I always mulch my outdoor pots as it helps keep them moist.  It also keeps the dirt from splashing out during rainstorms or waterings.

Instead of bringing the mulch to the pot, I decided to carry the pot to the wheelbarrow full of mulch on the other side of the garage.  I had to walk out past the cars and then go back in.  Big mistake.

The garage floor is maybe an inch higher than the driveway, if that.  I've walked in and out of the garage hundreds, if not thousands of times.  I didn't do so well this time.

Have a nice trip!

Do you know how many things you think of in that time between tripping and hitting the ground?  A lot.


I hope this pot doesn't break.

I don't have time to go to the hospital if I get hurt, there's too much to do for the party.

Don't hit your face and break any teeth!  (That's my mom in my head.  She broke her front two teeth as a teenager when she fell roller skating.)

I hope the bruises don't show.

Ugg, I'm going to have to redo this pot.

Did the plants fall out?

That's the snow blower there, don't land on it and break it.

There were more things I thought of in those two seconds.  Really.

The good news is that I wasn't badly hurt.  I had a few aches and pains and a bruised ego.

The better news is that the pot didn't break! 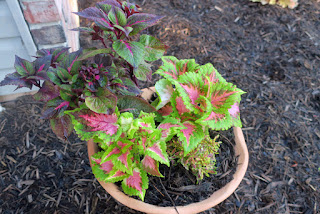 See you next fall!

AMDG
Posted by Donna at 4:30 AM No comments:

When I was digging out the last shrub of my never-ending-but-it's-going-to-be-finished-this-summer landscaping project, the shovel hit something that clunked unlike any of the roots that I was aiming for.  A couple more jabs and I pulled out a white plastic something coated in dirt and mud.

After I wiped off the muck, I discovered that St. Joseph has been right outside our front door for the last thirteen years! 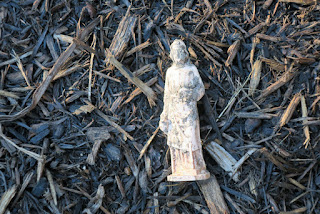 Over the last few years we have developed a special devotion to this saint.  He is our "go to" guy for all sorts of prayers and petitions.  Every morning, Himself and I pray the following prayer:


St. Joseph,
you provided for those who were
given to your care in this life.
Intercede on our behalf,
so we may receive the grace we need
to provide for those whom
are given to our care,
whether for a moment or for a lifetime.
Amen.

Now I understand.  He's been standing guard all this time.

I cleaned him up and found a better home for him than the dirt in which he was buried.  He now resides in the flower pot just outside the front door.  If you visit, don't forget to say hello! 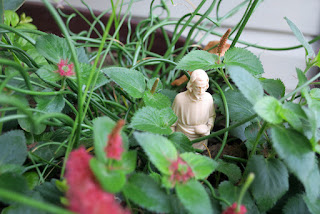 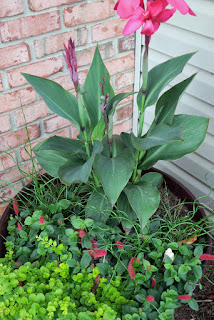