I have to admit, I thought about not doing Prayer Buddies this year.  It was just pure laziness, no other reason.  But, sometimes God gives you people to remind you that some things do matter and are worth the effort.


In just a couple of weeks we will be starting Advent.  I don't know about you, but I haven't given a whole lot of thought yet about what I want to do.  The one thing, I do know, is that I am looking forward to increased, focused prayer for my Prayer Buddy. During Advent, you can say prayers, novenas, and rosaries, light candles, and offer up suffering for your secret Prayer Buddy and whatever intentions he or she specifies.  On Christmas, or shortly thereafter, you will let your assigned person who you are and how you remembered them.Those interested in participating, please email me at:

I will need from you is:

DEADLINE FOR SIGN-UPS IS: Friday, November 30th
Posted by Donna at 9:58 AM 2 comments: 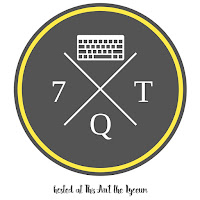 - 1 -
I knew it has been a while since I did one of these posts, but it was much longer than I remembered.  Either time is going by too quickly, or my memory isn't what it used to be.  I'm not sure which of those two options I would prefer. 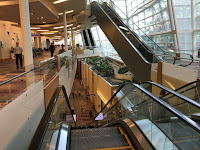 I attended a software user conference at the Aria in Las Vegas.  That place is enormous.  I spoke with a couple of women who had fit bits and one had 18,000 steps and the other was over 20,000 - in one day!  The hotel/casino/conference center puts on an exceptionally well organized event.  I was impressed by the people that work there.

On Monday, when I was walking back to my room during the afternoon break, several of the room cleaning staff were in the hallway, laughing.  They looked like they enjoyed each others' company and jokes.  One woman in particular, I do wish I could remember her name, had the most joyful smile and beautiful attitude about life.  We chatted for a while both that day and before I left on Wednesday.  What a great representative of the hotel was she!


- 4 -
There was an expo in which vendors talked about their products and tried to generate new customers.  And, they gave stuff away.  It felt like trick-or-treating for adults.  Mostly it was do-dads like pens, paper, candy, and small flashlights.  But, there were a few really fun things.  Mimosas at 10:30am?  Yes, please!  A bag silk screened to order?  Thank you very much!  And a very cute monkey?  I'll definitely take one!

- 5 -
Tuesday night's entertainment was a private concert by Train.  I can't say that I was familiar with their music prior to this event, but they put on one heck of a show.  I think I will soon be downloading some of their music.

- 6 -
One of the nice things about my job is that I can work from home on occasion.  And after getting home late Wednesday night, yesterday was one of those days.  Mid-morning Himself brought me a nice treat. I should work from home more often! 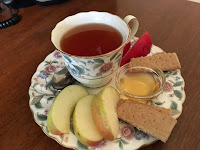 - 7 -
“There are two ways of getting home; and one of them is to stay there.”
- The Everlasting Man by GK Chesterton

Don't forget to check out more Quick Takes at This Ain't The Lyceum.
Have a great weekend!
AMDG
Posted by Donna at 4:30 PM 1 comment:

It may have taken eight months, but the Irish Chain quilt is finally completed!  This was a fun project and I am so glad the the FB group, Catholic in Stitches, suggested it.  I have sewn nearly a dozen quilts before this one, but I certainly learned a lot on this one.  I think it just may be my favorite! 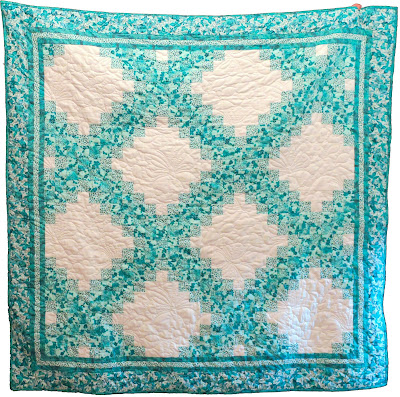 When finishing quilts in the past, I had always overlapped the ends of the binding.  It is not the best way as the join tends to be a bit bulky and obvious. Pinterest to the rescue!  I found instructions here on how to properly join the binding.  What a difference that makes!  You cannot tell where the two ends meet.

I frequently have problems getting the corners on my quilts just right.  I found a great tutorial, again via Pinterest, that was extremely helpful.  Check it out here.

On to the next project!

You know what they say the road to hell is paved with.  Well, when it comes to this blog, I picture that path being very long and quite nice looking!  I’ve got all sorts of posts started – on paper, in the draft folder, and floating around in my head.

I’ve read a lot of posts lately from bloggers wanting to get back at it.  Some do, some don’t.  I’m trying to figure out what works.  There was a link up last month, Write 31 Days, but if I can't write once every two weeks, how could I possible write daily?

Anyone interested in a once-a-week, jump start back to blogging link up?  I was thinking along the line of about six weeks, with some really easy topics.

Work travel seems to come in clusters.  I've been to our home office in Washington twice in the last six weeks or so and I'm heading to Vegas for a conference this month.  For whatever reason, some of my family seems to think this traveling is interesting and exciting.  I don't know why.  I feel like I should be mooing everytime I go through airport security and getting on and off the planes.  I don't sleep well and I don't eat right.  Home is where I'd rather be.

On the first of the two Washington trips I figured out what my "theme" song should be.  While waiting in the Chicago airport for the delayed last leg of my trip home, I bought a "protein" breakfast box  (eggs, cheese, nuts) from one of the vendors.  Of course, just as I dig in, the flight starts boarding.  I saved the almonds to eat on the plane.  As I bit into one, something felt funny.  I busted a tooth.  Unfortunately, since it was Labor Day weekend, I had to wait for Tuesday to get it fixed.  My song after that is now Crown Her With Many Crowns!

What a great World Series!  The only way it could have been better is if the Indians would have made it in again.  After a really great regular season, they had a most disappointing post season run.  I was even prepared with two new, politically incorrect Chief Wahoo, long sleeve t-shirts.  Oh well, maybe next year!  Now that there's no baseball to watch or listen to in the evenings, I don't know what I'm going to do.

The quilt is so, so close to being done.  There is just a lot of hand sewing to do.  The quilt shop, once again, did a tremendous job with the quilting.

Until recently, we have been having an unusually warm Autumn.  That has been great for the gardens.  Our pepper plants are still producing and the carrots are growing well.  We even had tomatoes up to about two weeks ago.  And to tell you just how dry this year has been, when Himself was digging out the potatoes, the steel tines of the garden fork bent almost ninety degrees!

Because of the dryness, we didn't get many pumpkins or watermelons this year.  But the pumpkins we did get made for a tasty pie.  Pumpkin soup is on the menu this weekend.

I am officially hooked on Pinterest.  The soup recipe that I am going to try was found there.  And, it has been terrific for finding quilting ideas and techniques.  Hopefully, more on that later.

The Hairy Beast thanks you for stopping by.