After a sewing drought, my machine is finally humming again.  I used to sew quite a bit but, until recently, haven't felt all that inspired to make anything.

After finishing curtains for my niece's bedroom (of which, of course, I forgot to take pictures) I decided to try my hand at a dress for her.  I picked up the pattern for only a dollar at a great sale at JoAnn Fabrics.  The material was from a skirt that mom had started making for me at least twenty years ago, that, for whatever reason, never got finished.  I love black watch plaid, but the skirt was cut out in a size I haven't seen in many years.

I was really happy with how this dress came out.  It was a fairly simple pattern.  The plaids matched up nicely on the sides and the skirt has just the right amount of flounce. 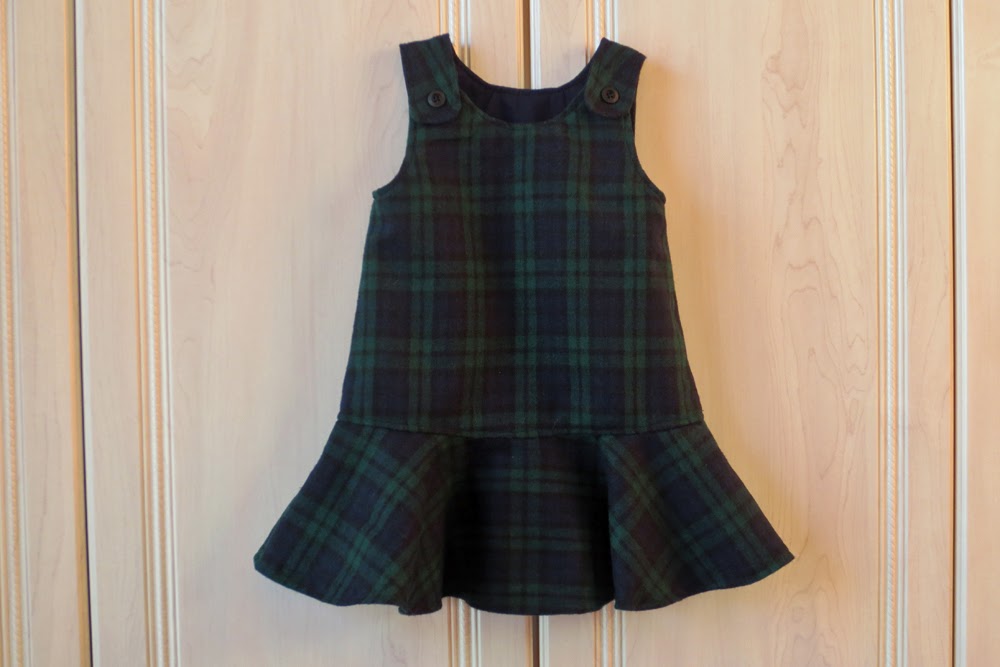 Our model, however, was a bit temperamental and didn't want anything to do with the photo session!﻿ 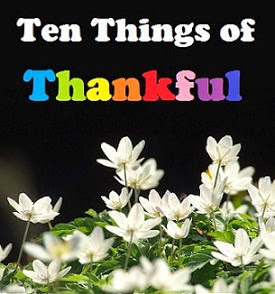 I've missed Thankful Thursdays so I decided to join in on Ten Things of Thankful.


-1-
The weather this last week or so has been wonderful, lots of sunshine and warm temps.  After the harsh winter it is very much appreciated.

If Spring had a smell, this would be it - hyacinths!  There is nothing better then working in the garden when the breeze blows their scent to me.

-3-
I love the company of baseball on my transistor radio when I am working in the garden.  Even though my beloved Indians aren't doing as well as had been expected, they are still entertaining to listen to, especially with Tom Hamilton as the announcer.  I can turn on the radio and tell by the tone of his voice whether they are winning or losing.  And the comments he makes?  Too funny!
-4-

I planted asparagus last year on a whim.  I was shopping in Sam's Club when I found the plants among their garden goods.  We had one lone spear last fall, which for a first year plant, was more than expected.  This year it looks like we'll get a bit more.  Yum!

-5-
While the Indians may not be doing very well (yet), the Cavs are in the playoffs.  And, they very handily won their first game.

The strawberry plants that I put in a couple of summers ago made it through the winter.  Now lets see if we can beat the chipmunks to the fruit!

-7-
Did I mention the weather?  I has been so nice to be able to take the dog for a walk without having to don long johns, sweaters, heavy coats, gloves, hats and scarves. 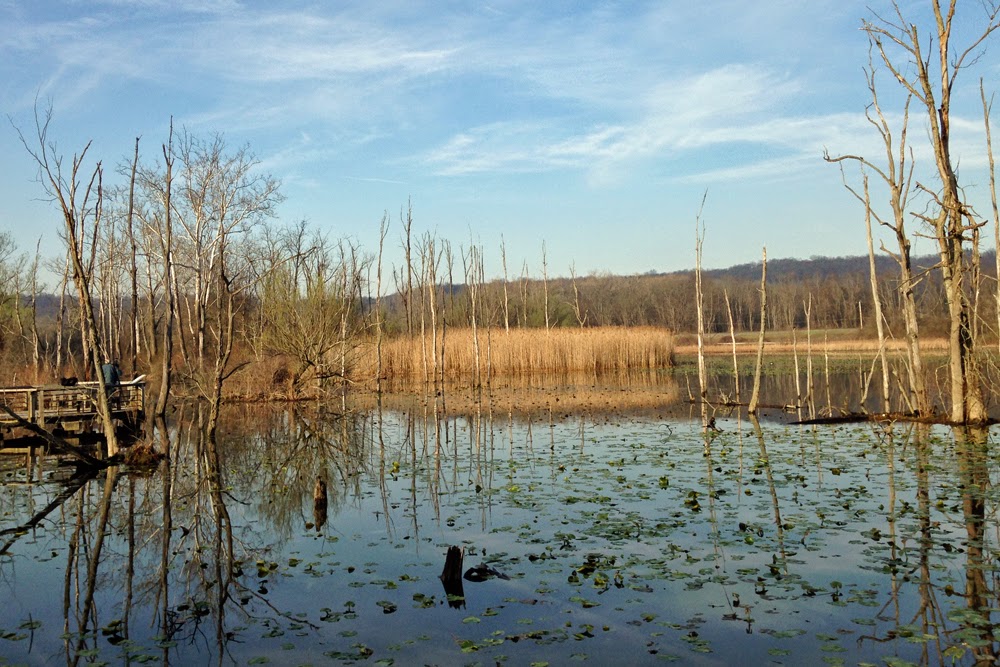 The National Park System has some lovely hiking trails and we took advantage of them this weekend.  We took a break during our hike and sat at the marsh and watched the Tree Swallows put on an aerial show for us.

-9-
After said hike, we stopped at a garden center on the way home.  I'm like the proverbial kid in a candy store there.  So many plants, so little time.

-10-
I am most thankful for thoughtful conversations with important-to-me-people.  Sometimes they are difficult but most often are very worthwhile.

Check out more goodness at  A Fly on Our (Chicken Coop) Wall.

﻿
Dad's birthday was yesterday but we celebrated it on Sunday.  Sis and her family came over and we had a leisurely meal and then enjoyed the sunshine, both figuratively and literally.  We often say that our niece and God-daughter is the sun, the moon, and the stars, and Sunday was no exception.

Sara seems to find delight not only in the new and beautiful, but also in things we take for granted, ignore, or even find annoying.  Pretty yellow wildflowers Dandelion flowers (I was told they are not) become a delicate flotilla in the stream.  Sticks become fishing poles and an orchestra conductor's baton.  Stones are a never-ending fascination as they can construct bridges, be given as gifts, or made into projectiles that, when properly tossed, will get Uncle wet.

After a busy week, looking at nature through a two year old's eyes was a perfect reminder to slow down.  Sometimes there is no better way to spend a day than tossing flowers in the stream. 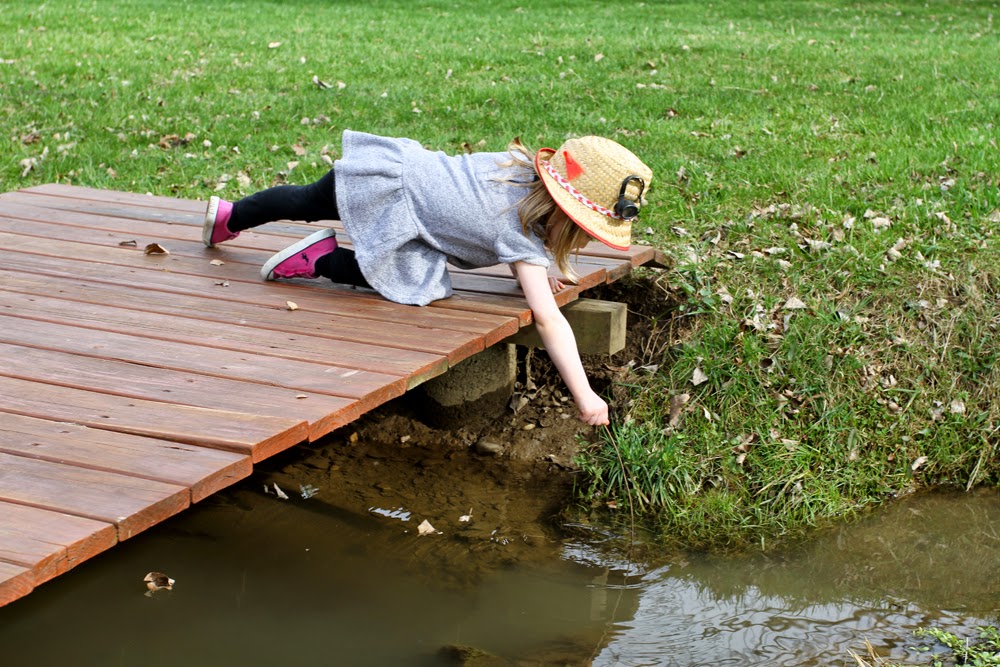 We were travelling down the highway on our way to spend a few days with our eighty-year-old uncle and his lovely bride, our seventy-eight-year-old aunt. Donna and I are good travelers and shared the driving duties with very few stops. Our travelling companion attracted all the attention on each of those stops. Jack is over one hundred pounds of lovable Labradoodle. People spot his head hanging out the car window or notice him stretching his legs at a rest-stop and their first reaction is to smile or approach him. This is the reaction we should strive to cause in others as we live out our vocations. We don’t even have to be canonized to do it.

Note that we didn’t name our dog Saint Jack. He can be a demanding neurotic with some obsessive-compulsive tendencies. (I wonder why my wife just asked if that sounds like anyone else I know?) Anyway, Jack has that Divine spark which shines through his “issues” and attracts others to the unobstructed joy in his heart.

You can read the whole article here.

Weekends with Chesterton: the Passion and Resurrection

…And if there be any sound that can produce a silence, we may surely be
silent about the end and the extremity; when a cry was driven out of
that darkness in words dreadfully distinct and dreadfully
unintelligible, which man shall never understand in all the eternity they
have purchased for him; and for one annihilating instant an abyss that is not
for our thoughts had opened even in the unity of the absolute;
and God had been forsaken of God.

They took the body down from the cross and one of the few rich men among
the first Christians obtained permission to bury it in a rock tomb in his
garden; the Romans setting a military guard lest there should be some riot
and attempt to recover the body. There was once more a natural symbolism
in these natural proceedings; it was well that the tomb should be sealed with
all the secrecy of ancient eastern sepulture and guarded by the authority of
the Caesars. For in that second cavern the whole of that great and glorious
humanity which we call antiquity was gathered up and covered over; and in
that place it was buried. It was the end of a very great thing
called human history; the history that was merely human.
The mythologies and the philosophies were buried there, the gods and the
heroes and the sages. In the great Roman phrase, they had lived. But as they
could only live, so they could only die;
and they were dead.

On the third day the friends of Christ coming at daybreak to the place found
the grave empty and the stone rolled away. In varying ways they realised the
new wonder; but even they hardly realised that the world had died in the
night. What they were looking at was the first day of a new
creation, with a new heaven and a new earth; and in a
semblance of the gardener God walked again in the garden, in the cool not of
the evening but the dawn.
The Everlasting Man
AMDG
Posted by Donna at 12:30 AM 1 comment: 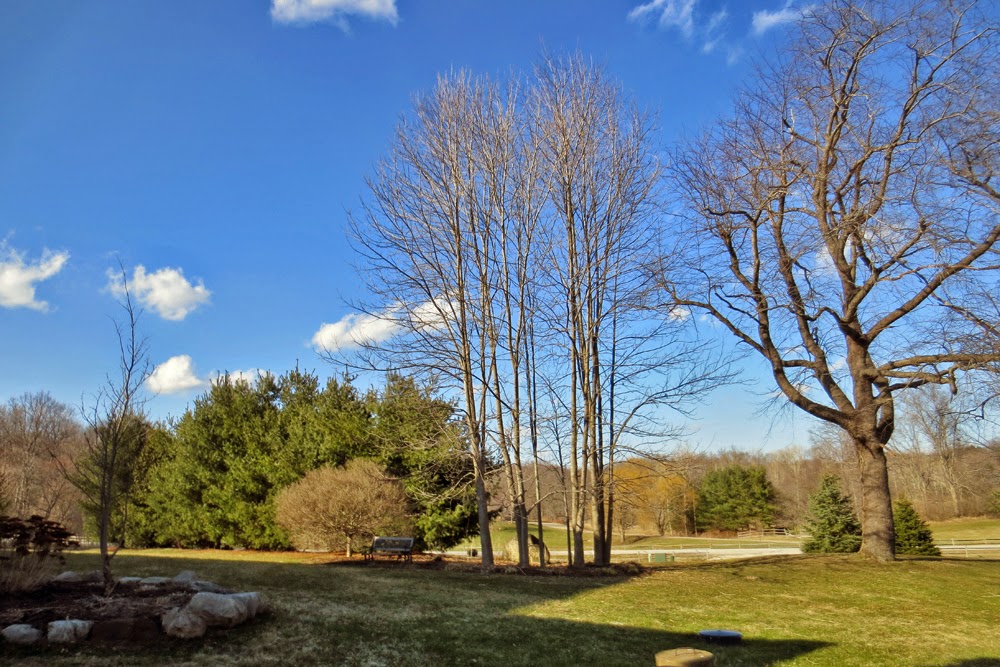 Yikes!  How did it get to be April already?  March just flew by in a blur.  The weather has been improving, at least a little bit.  It hasn't cooperated enough to let me get out in the yard and start my spring cleanup chores, but that is probably a good thing.  We have had a lot going on and yard chores would have just one more thing on the "to do" list.

There was no foolin' with today's weather - sixty and sunny.  Bring it on, baby!