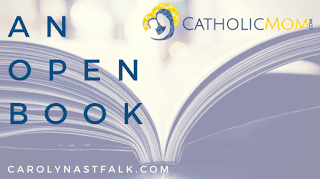 September marked the thirteenth anniversary of my mom's death. It was purely by chance that two of the books I read this month featured main characters who lost their mothers and the grief and feelings that followed.
In The Sunday Potluck Club by Melissa Storm, four women who became friends by chance meetings in the hospital cafeteria while their parents underwent chemotherapy for their various cancers learn to deal with life after a loss.  After the death of the third parent, we see how each of the four women deal, or not, with the grief and sadness that follows.  Amy and Bridget each throw themselves into projects, with varying results.

Things would never be fine again. They could only become marginally less terrible.

When Natalie Harper's mother doesn't show up for the party celebrating her new promotion at work, she is disappointed but not surprised. Her mom has been known to be somewhat forgetful and distracted. But when Natalie finds out why her mom wasn't there, she is devastated. The Lost and Found Bookshop by Susan Wiggs follows Natalie as she reevaluates her life and makes changes to her priorities and tries for find joy again, something that was missing long before her mother's death.

When she was very small, her mother used to tell her that books were alive in a special way. Between the covers, characters were living their lives, enacting their dramas, falling in and out of love, finding trouble, working out their problems. Even sitting closed on a shelf, a book had a life of its own. When someone opened the book, that was when the magic happened.

A book would never betray you or change its mind or make you feel stupid. She took down The Once and Future King and found a marked passage: “The best thing for being sad,” replied Merlyn, beginning to puff and blow, “is to learn something. That is the only thing that never fails.”

Head on over to Carolyn's for more An Open Book.